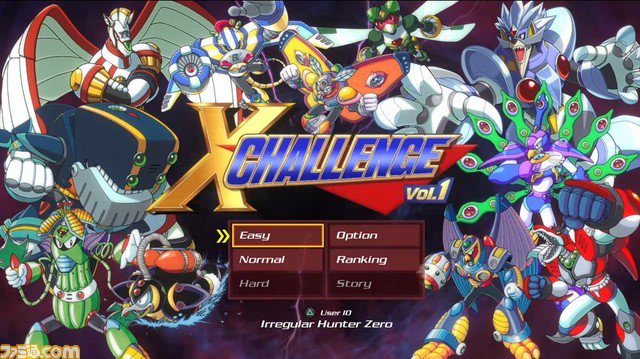 As previously reported, Mega Man X Legacy Collection 1+2 will feature a new "X Challenge" mode that let's players battle two Mavericks at the same time. However, it now looks like there's a bit more going on here than we thought.

According to a preview of this week's Famitsu, X Challenge will feature an original "story mode". It remains to be seen just how in-depth the story will be or if there's a unique story to Collection 1 ("X Challenge Volume 1") and Collection 2 ("X Challenge Volume 2"). Whatever the case, this is pretty interesting. Story mode might even explain that mysterious, seemingly new white armor we've seen in past previews. It's something to watch for.

Also worth pointing out, a few Mavericks from Mega Man X Legacy Collection 2 are making the jump to "X Challenge Volume 1". Duff McWhalen, The Skiver, Commander Yammark, and Blizzard Wolfang come from Mega Man X5 and Mega Man X6 respectively. We still don't know too much about who will be included in X Challenge Volume 2, though I don't believe we'll be seeing anyone from X7 or X8. There's been little to no evidence to suggest any of the "3D" bosses will appear.