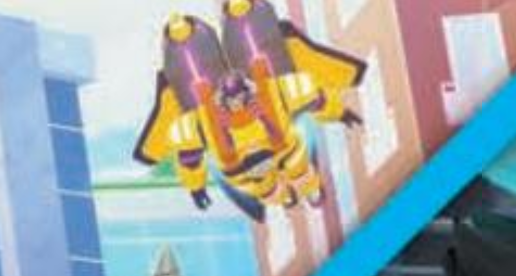 Back in March we caught our first glimpse of five Robot Masters from Mega Man: Fully Charged, the new animated series hitting Cartoon Network later this year. Most were recognizable, one or two not so much. Today we're looking at someone that fits into the latter: a mysterious, yellow fellow rocking some major Starscream vibes.

This image comes to us from the latest Licensing Source Book, the very same issue that revealed the show's new subtitle, "Fully Charged". It remains to be seen if this character is a reinterpretation of a classic Robot Master (Gyro Man? Astro Man? Maybe someone from Mega Man 11?) or an original character entirely. My money's on OC – remember, we're to expect quite a few of those.

I don't believe we'll be waiting much longer to learn more about this guy. I've spoken with an artist on the series and it sounds like more concrete details about the show are coming this summer, if not sooner. (Licensing Expo starts May 22). My ear will be on the ground.
Posted by Protodude at 12:35 PM