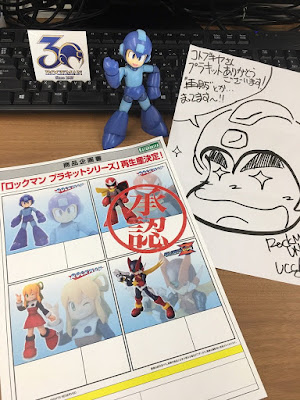 The Kotobukiya kits were officially discontinued in 2013. Two years later, the company re-released Mega Man, Roll and Proto Man for a limited period. Although you can easily find these kits today, they don't come cheap. The 2018 reissue will most likely bring prices down to their initial cost (between $25~$35 USD). Be on the lookout. (UPDATE: The kits are slated to ship in February! Mega Man, Roll and Proto Man will go for 3,200 yen (about $28.00) and Zero for 3,600 yen (around $32.00)).

Sadly, there's still nothing to be said about the potential for new model kits. But, hey, we can dream. Which characters would you like to see?
Posted by Protodude at 9:11 AM