Famitsu's review of Rockman 1 is almost as old as the game itself. So it's pretty timely that, for the very first time, it's been translated in English. 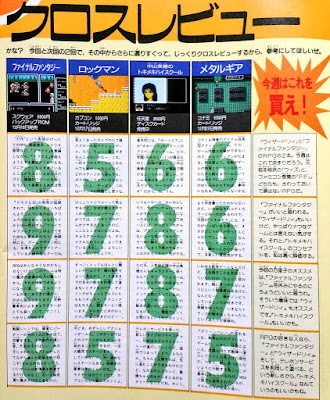 This neat little blast from the past comes to us via Garou:

5: An action-scidescroller like we had them often in the past. But isn't it a little too hard? You can start with any of the 6 stages, but I couldn't reach any of the bosses no matter where I started. Uhm, I guess it's a balancing-problem.

7: It feels a bit malicious, but somehow this action-game gets me fired up. Once there were so many of these games, but in recent times they've been rather scarce. Even the characters, even though they are original, are quite good (excuse my rudeness). Well, it's quite welcome.

7: A really totally very hard game. You have to take a really close look at the movements of the enemies while calculating your next 2-3 steps, otherwise you will fail. If you miss the timing just a little bit it's already over. You have to use your skills of course, but also your head quite a bit. Although I love the animation when Rockman gets hit.

5: A rather rare type of game these days. You can start this game from any stage, but there are some stages that if you don't clear them in a specific order you won't be able to advance. I won't hint any further than this. The characters are cute, but typical of Capcom it's super-hard.


In total, the game scored a 24/40 (for comparison, Rockman 2's score was marginally better with a 28/40). The consensus is pretty consistent with the game's general reputation. It's neat to see that, despite the game's difficulty, everyone was impressed with the freedom start from any stage.

Low score aside, Rockman 1 went on to become a surprise hit, warranting a reprint in Japan in the Spring of 1988. The rest is history.