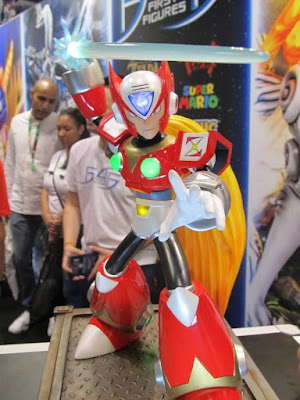 In late May it was reported First 4 Figures' Zero statue was coming back from the dead thanks to fan support. Today, the new and improved mold made its grand debut at the New York Comic-Con showfloor.

Compared to the original mold, this new Zero features a completely redesigned head and face, among other minor adjustments. The LED lights – exclusive to the previously announced "exclusive version" – look quite nice against the refreshed red and gold paint. Word has it there may be a black armor variant on the burner too. All in all I think this is a pretty significant improvement over the previous mold. Zero's limbs, though, could use some work. A little too rubber hose-like, if you ask me.

No word yet on price or release date, I'm afraid. Hopefully those details are coming sooner than later. In the meantime, hop over to Mega Man World for more photos.
Posted by Protodude at 8:03 PM