So I wasn't going to address this until Comcept or Deep Silver came forward... but I don't think that's gonna happen at this time. So here we are: Game Informer and Destructoid confirmed with their sources at GameStop (Game Informer's parent company) that Mighty No. 9 has been delayed to 2016.

"GameStop tells us on background that notification of delays such as this one are initiated by the publisher. This includes placeholder dates that are put in place when a game is first listed or, in this case, delayed. This indicates that the 2016 placeholder was driven by Deep Silver and Comcept."

"I can now confirm through a source at GameStop that the delay is real, and not a mistake or placeholder change."


However, in a July 30th update over on Mighty No. 9‘s official website, staff claim September is "Mighty Month" and the game will release on time. But if these reports are true, it's a strong possibility only the physical versions of Mighty No. 9 have been delayed to 2016. Confusing, to say the least.

It's unusual Comcept and Deep Silver have gone this long without providing backers and fans with an official statement.

In any case, we'll keep an ear to the ground.

UPDATE: I want to address this post from VGStations since it keeps coming up.

That was a completely separate issue regarding the physical Signature Editions and has no bearing on Game Informer OR Destructoid's reports. The forum posts used as evidence are dated a full week before the GI article went live. Those responses are regarding the e-mails Amazon sent out saying they were unable to fulfill Signature Edition preorders.

UPDATE 3 (8/5) - Game Planet, a retailer in Mexico, just sent out delay notifications to customers who preordered both standard and signature editions. 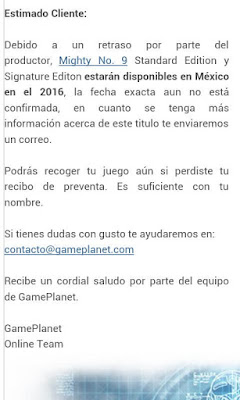 Still waiting for Comcept/Deep Silver to confirm/deny these reports.
Posted by Protodude at 12:36 PM