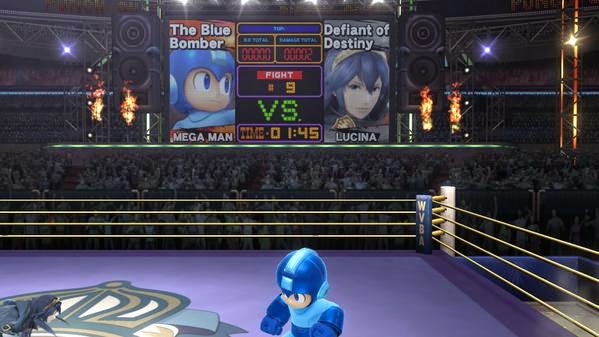 The North American version of Super Smash Bros. for Wii U erroneously refers to Mega Man as the "Blue Metal Hero" in the Punch-Out boxing ring stage. The title was thought to be an obscure reference to Metal Heroes, the subtitle for Mega Man 8's Japanese release. And now, with the launch of Smash in Europe, the jumbotron displays something a bit more recognizable: The Blue Bomber.

I'd wager we'll see the title amended in North America sometime soon -- this seems like something that could easily be patched. UPDATE: Or not. Apparently, this is but one of many intentional translation differences between the North American and European versions. Smash was seemingly localized by two independent teams, as demonstrated by trophy descriptions. "Blue Metal Hero" is probably here to stay.

Thanks to Liam Ashcroft for the tip, kuroneko0509 for the image.
Posted by Protodude at 5:12 PM