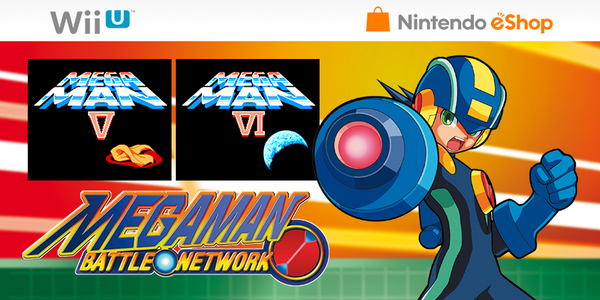 Good news for our friends in Europe: a triple dose of classic Mega Man games are coming your way. Nintendo of Europe (and Nintendo UK) have announced that Mega Man 5, Mega Man 6, and the original Mega Man Battle Network are all headed to the Wii U Virtual Console on July 24th.

Another piece of good news: according to today's press release, Mega Man 5 and 6 are the US versions. As one may recall, the PAL versions played at a slower framerate than their North American counterparts.

So in just a few short days you'll be able to complete your Wii U NES Mega Man collection and kick off, what we hope will be, a string of Battle Network releases. No word yet on when these titles will hit North America. The sooner the better, though; I'm keeping my fingers crossed for Thursday. If not, we'll keep you posted.

Thanks to Eric for the tip!
Posted by Protodude at 12:15 PM