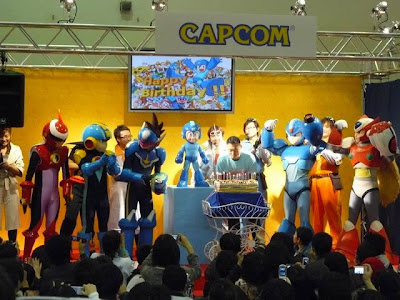 Capcom's been pretty quiet in regards to Mega Man's upcoming 25th anniversary.  This has left many with a growing sense of skepticism towards the company and the priorities of purported "top men." However, this may be poised to change... but not for a little while.

In a recent Ask Capcom live Q&A stream (about 30:49 in), community manager Brett Elston touched upon when fans could expect to hear Capcom's plans for the anniversary.

"I feel like December's a good time. It also gives us time to focus on Street Fighter's 25th anniversary which is in August," Elston shares. "Yeah that's right; stay out of our anniversary, Mega Man weirdos!" jokes Seth Killian.

"But yeah, we'll most likely have something to say about the anniversary in December. But as to what it is, we're still discussing that, " adds Elston. "We had a meeting not long ago... very much happening inside those walls."

If you recall, previous anniversaries had announcements (and surprises) leading up to December 17. It doesn't look like that's happening this time. Whatever Capcom's got planned, we're a good six months away from hearing about it.
Posted by Protodude at 12:29 PM