The video starts with a funny "engrish" message from Dr. Light. This is something that wasn't made just for the trailer, though... you will actually see it in the game itself!

Next we have what they call a "New Challenge" that takes place in the Jakob Orbital Elevator from Rockman X8. This is likely to be an event, but it remains to be seen if it will be a "limited time offer" like the Candy Factory or Prince of the Skies event or a permanent event like the ones you can play twice a day to get extra resources (like Zenny, Armor Enhancements and other things).

This event will see the debut of a new remix of the track "Jakob" from the Rockman X8 soundtrack.

Next, we have the introduction of what looks to be two new stages for Story Mode: "Area A" from Rockman ZX and the "Military Train" from Rockman X4 (Slash Beast's stage). Neither one of these this stages are totally new, though. You can play two levels of each of these stages in the Co-op mode.

New to Rockman X DiVE is the introduction of stage enemy "Gun Bit" from Command Mission in the Area A stage (or Area Forest as is called in the Co-op mode). 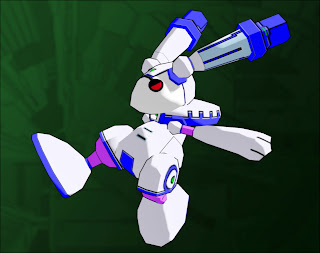 Lastly, with the introduction of these new stages to Story Mode, it seems that the level cap will be raised from 60 to 70, which brings the possibility to fully level up our weapons and acquire new armors, among other things.

Be sure to check your in-game mail to grab the following items: "Weapon Memory Supply Box III x1 and Element Metal x100" that the development team gifted to every player for their support.


That's about all the information available on this major content update at the time of this trailer. It's also unknown if the update will be available next Thursday after the regular maintenance period.