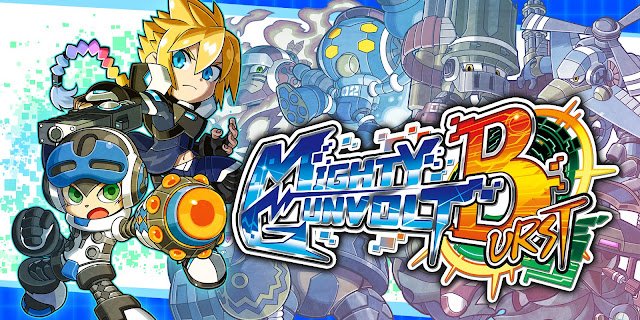 I thought I would be playing Arms today. I thought my gaming free time would be spent on Nintendo's latest hit. I was wrong, though. Mighty Gunvolt Burst - this little thing from Inti Creates - is eating up Arms' share. 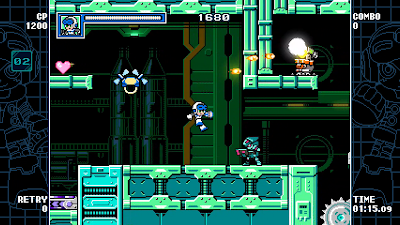 For the uninitiated, Burst gives players the choice to play as Beck from Mighty No. 9 or Gunvolt from Azure Striker Gunvolt. Regardless of who play as you'll be running through the same Mighty No. 9-inspired stages. If that makes you squirm, hear me out: the stage design is good. In Mighty No. 9, stages were hampered by poor design; instant death traps and confounding gimmicks that frustrated than empowered. Nothing in Burst feels unfair. These stages provide a fun challenge and encourage mutliple playthroughs to rack up a high-score and collect everything. 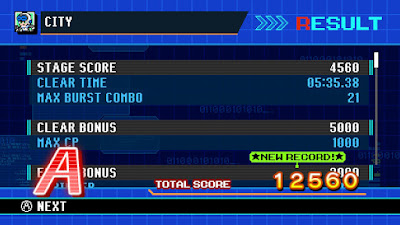 The scoring system, while fun in itself, isn't as fleshed out as it could be. You're graded on completion time, how many times you died (you have unlimited lives but your score is penalized) and however many points you racked up through the Burst System. These points are awarded through killing enemies in close proximity. The more Burst combos you chain together, the more extra points you get. It's a neat idea but it doesn't really go anywhere. For example, you could beat a stage with a really high score and all you'll get is a letter grade. That's about it. Scoring doesn't factor into anything substantial other than bragging rights. That's not necessarily a bad thing, though. Scoring is what's keeping me coming back for more. It's an aspect I think speedrunners will enjoy quite a bit. 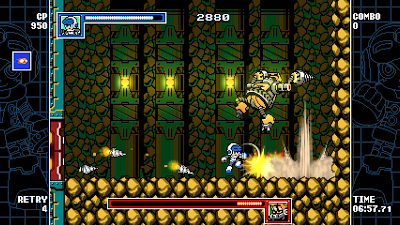 Beck isn't the only familiar face from Mighty No. 9 - the Mighty Numbers are back. And before you squirm again, hear me out: Inti Creates completely retooled their difficulty. The Mighty Numbers dish out familiar attacks patterns, but this time they won't leave you with a heart aneurysm. Maybe it's because the game is presented in a 8-bit/16-bit style, but it's far easier to pick up on a boss' tell than Mighty No. 9.  Best of all? Those cheap insta-kill attacks are gone. In their place, the Mighty Numbers have one powerful attack at their disposal. This won't kill you in one-go unless your low on HP. Play your cards right, though, and you'll rise back up to throw down the hurt. It's a great feeling.

For better or worse, the Mighty Numbers do not engage in banter with Beck or Gunvolt. They're entirely silent. However, their individual personalities shine through their unique movesets. My personal favorite is Countershade. This grizzled marksman tries to lure players with fake health drops as he bobs in and out of cover. When he gets down to a fourth of HP, Countershade fires a bullet into your screen! You're then forced to finish the fight with a nice bullet hole in the middle of your television (or Switch screen if you're playing undocked). It's not intrusive - it's personality. 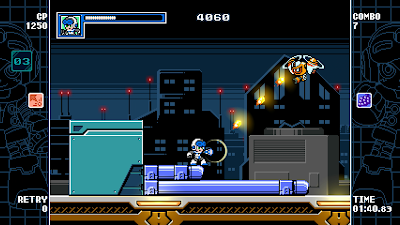 The absolute best feature in Burst, hands down, is customization. All those collectibles you picked up along the way? This is where they go to work. Using these parts, you can create your own weapon sets. The amount of options and parameters at your disposal is astounding. If you have the right materials, you can choose the way your weapon is fired, it's speed, trajectory, the number of bullets, the size of the bullets, elemancy, whether or not it pierces through walls, and so much more. You can straight up adjust the strength of your shots if you wanted to. Simply put, Burst is a game that you make your own.

So the tl;dr of it, Mighty Gunvolt Burst is damn good fun and worth the $9.99 in your pocket. Whether you dish that out now or wait for the 3DS version, doesn't matter; you're in for a treat. Inti Creates has another winner under the belt.
Posted by Protodude at 9:10 PM