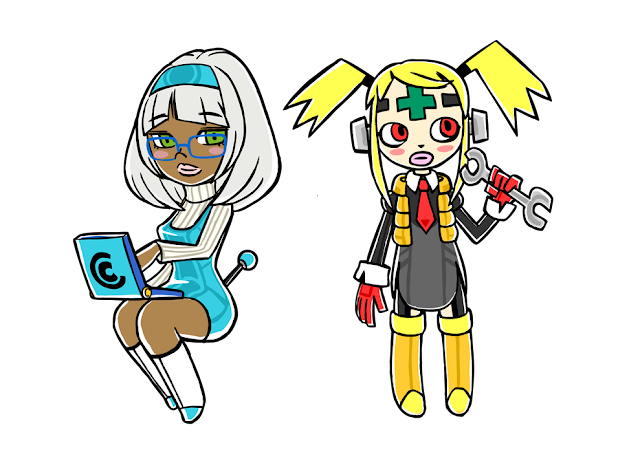 Our Mega Man Universe postmortem project continues with a look at two never-before-seen characters. My sources could not recall the official names for these girls, but one thing is absolutely certain: they were intended to be Mega Man and Roll's sisters for Mega Man Universe. We'll call them "Glasses" and "Met" for now.


Roll, Met and Glasses served as curators for Mega Man Universe's three key modes. Roll oversaw character creation and customization (as depicted in old trailers and screenshots). Met oversaw "Construction Mode", guiding players through the ebbs and flows of building stages from scratch. And Glasses supervised "Network Mode" where players could upload and share their stages all over the world.

According to my sources, Met was "a little aloof but extraordinarily passionate in her craft". Construction and engineering were her forte, thanks in no small part to her Mettaur-based brain (reflected in her appearance). Glasses, meanwhile, was described as a "walking, talking internet modem". When speaking to the player, her dialog was "direct, formal and calculated". She would occasionally break character to reveal a penchant for candy and sweets. And yes; she does indeed have a tail. It's an antenna.

Neither Met nor Glasses appeared in Mega Man Universe's heavily Mega Man 2-inspired "story mode", apparently. Their appearance – at least up until the game's cancellation – was limited to their respective game modes. It remains to be seen if the developers intended to augment them into Mega Man 2's storyline. The groundwork for their personalities was there, though. Met and Glasses certainly would have made this would-be Mega Man 2 "remake" a lot more notable. At least now, almost ten-years-later, we can appreciate and honor them.

More Mega Man Universe discovers are coming soon! In the meantime, check out the game's entire official soundtrack and some unreleased Robot Master artwork here!
Posted by Protodude at 9:09 PM