Ryuusei no Rockman Tribe: Off Air! 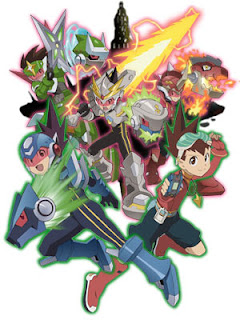 It appears the anime adaption of RnR2's story arc is coming to a premature end at episode 21, according to the anime's developers Xebec.

This is very bizarre as previous Rockman anime adaptions have ran up to forty plus episodes.

So, is Rockman off airwaves for good? Not quite.

Supposedly, "Zero Duel Masters" the anime that airs prior to RnR Tribe, is getting the boot as well, which may lead to speculation that the block, "Oha Colesium" is merely switching out both shows in favor of new shows for a period of time.

This seems to be the case. Taking the place of RnR is "Penguin no Mondai", a children's show about an anthropomorphic penguin. That's cool, right? (Thanks for the tip Scipio)

My thoughts? I believe that anime adaption of Ryuusei will return-in November to coincide the release of the rumored and inevitable RnR3.

A popular trend in anime as of late is airing shows for half a season and continuing it a few months later. This process is currently being done by shows such as "Mobile Suit Gundam 00" (highly recommended) and "Code Geass." This is done to ensure higher quality animation and scripts.

Of course, I could be wrong. There is a possibility that the show was actually canceled due to low ratings, thus further adding a nail in Rockman's coffin. (What's up with bad news as of late?)

However, this is Rockman we're talking about. You know, "Never say die."
Posted by Protodude at 8:14 PM