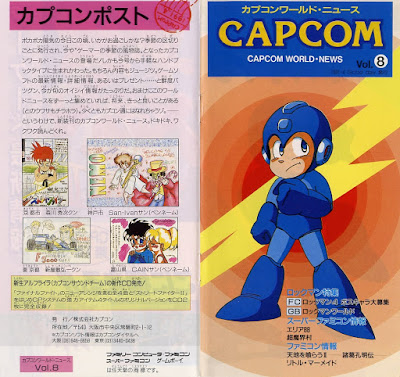 I've got a neat blast-from-the-past to share with you all this weekend. A one "Brian" has graciously gifted Rockman Corner with several high quality scans of Capcom's oldest-known publication, "Capcom World News". Inside the pages of these age-old newsletters lies some very neat Rockman history.

Today I'll be sharing complete scans from Capcom World News Issues 1, 5, 6, 8, 9, 10, and "Extra". You can download all of them from my Dropbox or Drive. Note that they're in .tiff format. After the jump below, I've written up a little breakdown of all the noteworthy gems inside each issue. 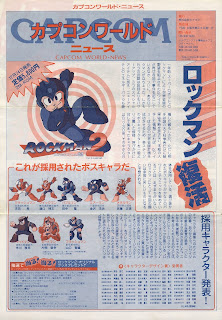 The oldest issue of the batch (1989) includes a single-page preview for Rockman 2. The most significant bit here is the number of Boss Design Contest entries there were (8,730!) and that Rockman 2 takes place one year after Rockman 1. That tidbit of info is fairly well-known these days, but just think that this was probably the first time that information was officially conveyed. 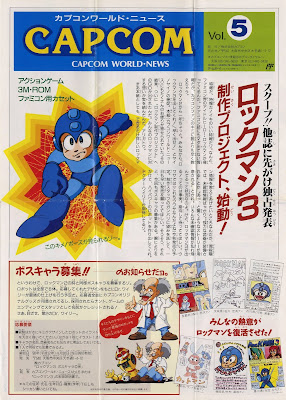 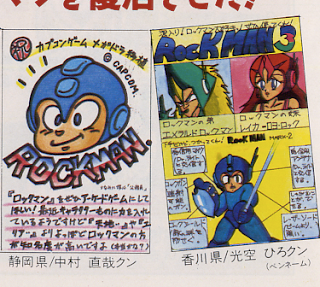 This issue kicks things off with the announcement for Rockman 3 and its respective Boss Design Contest. The bottom right of this page features (very old) fan-art from Rockman admirers eagerly anticipating Rockman 3. The piece in the bottom right corner is an imaginative "Rockman Team". The character on the left is Rockman's brother, "Emerald Rockman". The character on the right is Rockman's little sister, "Reika Royo Rock". Finally, the character below is "Rockman Mark-2" – a powered-up version of Rockman with a sword, shield, and helmet communicator. Radical! 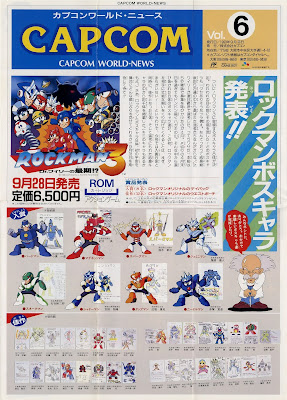 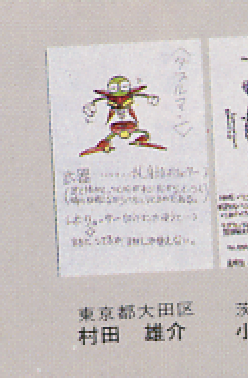 This issue spotlights the results of the Rockman 3 Boss Design Contest. The eight winnin Robot Master designs are featured alongside their original designs by their creators. Note that Hard Man was originally called "Press Man" as in a machine press. It all makes sense now, doesn't it? Also of note, you can see Yusuke Murata's first Robot Master design, "Double Man". 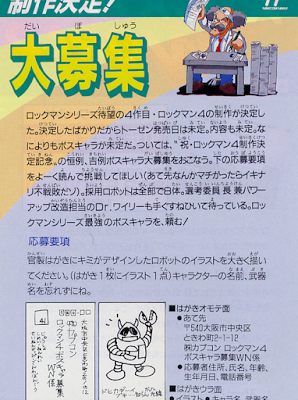 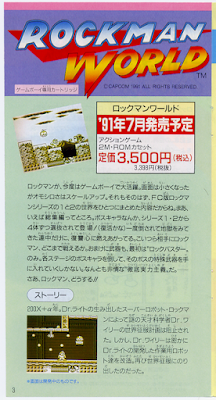 The Rockman 4 Boss Design Contest is announced, tasking fans to whip up their own fiendish creations to be featured in the fourth entry. Lots of hype for Rockman World in here, too. Note the pre-release screenshots with unused Health and Weapon Energy Bars! 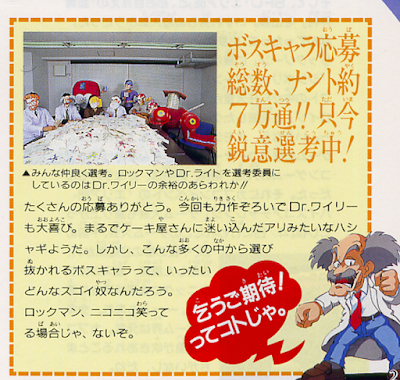 The ninth issue features a great pic of the Capcom staff looking over HUNDREDS of Rockman 4 Robot Master design entries. It looks like the Capcom staff member disguised as Rush went the extra mile and stuck "Rush Coil" on his back. I wonder who it could be... 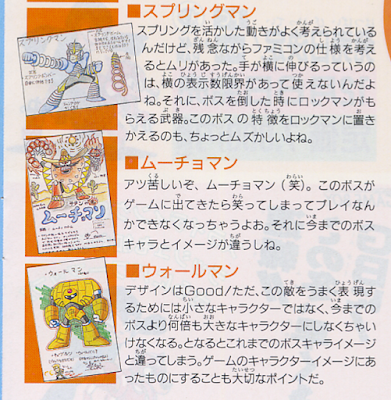 The tenth issue is fun. It includes Capcom staff commentary on various Rockman 4 boss design entries. From top to bottom we have "Spring Man" (unrelated to Rockman 7 Spring Man), "Mucho Man", and "Wall Man". Also includes is an in-universe interview between Dr. Light and Dr. Wily (I will have that translated in part 2, among other things), a peek at Capcom's then-upcoming games at the Tokyo Toy Show, and lots of Rockman World 2 hype. 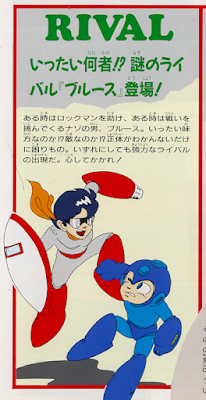 So yeah, here they are. Thanks again, Brian! I'm currently in the process of obtaining additional issues plus other old Capcom publications (Capcom News Wave, old Capcom Faxes, etc.) so look forward to that. Part 2 will include the remaining World-News issues with some translated text – only the real noteworthy stuff. We'll go back and revisit pieces of text from Part 1 as well. For now, do enjoy! Scroll back to the top and snag yourself a download!

More Patreon-backed projects surrounding the documentation and research of various pieces of rare and lost Mega Man history are coming down the pike. As always, your support is very much appreciated. It's a dollar to start; no paywall content. Learn more here!
Posted by Protodude at 10:12 AM