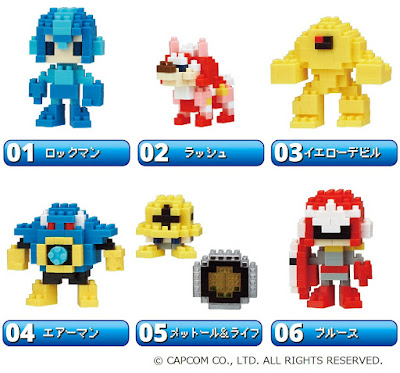 Another announcement coming out of Tokyo Game Show this past weekend. Nanoblock have announced that six new Rockman sets will be released at the beginning of October for 500 yen each. These sets were also on display alongside the recently announced Takara Tomy Rockman Collection 2 figures on the Capcom Booth at Tokyo Game Show.

The original Rockman Nanoblocks were released in 2013. They were fairly popular among hobbyists – it's good to see the line is back and lookin' better than ever!

Source - Official Nanoblock Twitter
Posted by Vhyper1985 at 4:53 AM