If you are in need of a refresher or are new and wondering what Pachislot Rockman Ability even is you can check out all of our previous coverage here and also here for character profiles, artwork, modes and more!

Today we bring you the story cutscenes in glorious 1080p 60fps. There are no subtitles at the moment, though do know we are currently in the process of translating all of this footage (and more). It's going to take some time so I didn't want to keep you all waiting until it was done!

So without further delay enjoy!

"Attract Mode" is the cutscene that will play while no-one is playing the game and is meant to be silent. When you start the game, Rock and Trancy are investigating a recent attack on the city while looking for clues. Little do they know, however, that they're being watched! The scene then shifts to nighttime and city is under attack from Wily's forces. Rock does battle with some Sniper Joes.

This cutscene plays after the end of Stage 1. Roll and Trancy are surrounded by Joes, and Rock appears in the nick of time. The trio take out the Joes simultaneously – and then there's a familiar sound! "I know that whistle!" Blues appears on the scene and wants to "test" Rock's capabilities. Blues goes on the attack; Rock loses sight of him and Blues counters. Roll jumps in to save Rock but takes the brunt of the attack, immobilizing her! Trancy then teleports the gang back to the lab where we are introduced to Dr Emilia Right (daughter of Dr. Thomas Right in this game's universe) she starts repairs on Roll while Rock goes off to find Blues.

Rock finds Blues in an arena surrounded by lava. Blues wants to know who is the superior model (this sounds familiar right?). Just as the fight starts, the scene cuts to Roll waking up after being repaired by Dr. Right. Right gives Roll some information on Wily and Roll sets off to investigate Wily's lab.

Stage 4 starts where the actual "stage" part of Stage 3 ends with Roll sneaking around Wily's labs. She stumbles upon blueprints and data for both herself and Trancy! Suddenly the alarm sounds and Roll is ambushed by the Joes. Roll teleports back to the lab and goes to speak with Dr. Right in private. She tells Dr. Right about what she has found, but before Dr. Right can respond, the power is cut and Roll is teleported out. The power comes back on to reveal that oh so familiar "W" logo. Right and Wily have an exchange and the scene ends.

This chapter starts with the end of the battle between Rock and Blues, with Rock being the victor. Rock finds out that Blues is essentially a copy of his blueprints; Wily then interrupts the scene and since Blues has failed, Wily has no use for him and detonates bombs around the arena causing a cave in. Rock struggles to get away but is saved by Blues who then ends up buried beneath the rubble. The scene then cuts to Wily being.. well.. a bit creepy with Roll and gets to work reprogramming her.

The previous stage has Rock entering Wily's fortress looking for Roll. This chapter begins after he enters, and we can see that Trancy has also made it to the fortress. Roll makes her entrance sporting a snazzy new Kamen Rider-esque looking belt and shoots Rock! Rock falls to the ground with Trancy trying desperately to wake him. Roll then threatens Trancy but somehow snaps out of her brainwashing long enough to tell Trancy to get away. Trancy reluctantly teleports both herself and Rock back to the lab where she vows to bring Roll back somehow.

Trancy fights her way back to where Roll is and tries to plea with her to stop. Roll pretty much ignores this and shoots Trancy! As Trancy falls, she launches a barrage of missiles out of her earphones, which all this time weren't just for show! After getting hit by the missiles, Roll's mind control belt shatters and she's back her to her former self. Surprised at what has happened to Trancy, Roll teleports herself and Trancy back to the lab. Roll is annoyed that Wily used her and sets off back to the fortress to settle things.

Stage 8 - "Shame Because of the Machine"


The chapter starts with Roll confronting Wily and points her buster at him (Rockman 7's ending anyone?). However unlike Rockman 7, Roll actually tries pulling the trigger on Wily! Of course this doesn't work since the laws of robotics are a thing. Wily then taunts Roll and she pretty much loses all hope. Wily orders the Joes to dispose of her. As their shots get closer to Roll, she is saved by a blue shot out of nowhere. It's Rock! He's been repaired! Wily retreats as he always does, and Rock picks up Roll and they prepare for the final battle ahead.

Rock and Roll use all of the different Robot Master abilities they aquired to take out all the remaining Joes (you can find out more about the special weapons in our previous coverage here). After the Joes are dealt with, a giant fist comes out of nowhere and sends Roll flying. We are then introduced to the Wily Machine! Wily and Rock have an exchange and then it's on to the final battle.

Rock deals a huge blow to the Wily Machine. However, Wily still has a trick up his sleeve! He fires the machine's giant fists once more and grabs Roll. Rock dash-jumps to try and grab her but just misses! Wily then puts Roll inside the Wily Machine, powering it up. Rock fires another shot but once it hits it ends up hurting Roll. Rock is at a loss of what to do; if he destroys the machine, he could also end up destroying Roll!

Roll tells Rock the there's only one way to beat Wily. Roll decides to overload herself to destroy the Wily machine, sacrificing herself. All that remains of her are her headphones.

Rock starts crying over the loss of his sister – but Wily isn't quite finished! The Wily Capsule fires a missile at Rock. Rock, now in-rage, fires a powered-up shot that takes out both the missile and the Wily Capsule! We don't actually see if Wily even survives this, believe it or not.

Rock heads back to the lab and explains what has happened. Some time later, Dr. Right comes into the lab where Rock and Trancy are chatting and, surprise, Roll has been rebuilt! Roll runs towards Rock to give him a hug and the credits, uh, roll. At the end of the credits there's the usual "Thank-you for playing" screen.

And there you have it! The story mode cutscenes in full! We will be sure to keep everyone posted on the translation progress and footage of the stages themselves + the new vocal music tracks to share with everyone! So stay tuned! 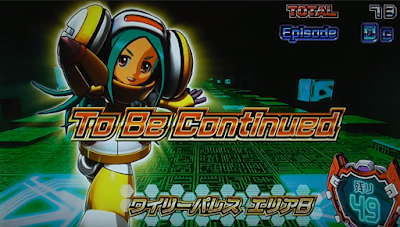 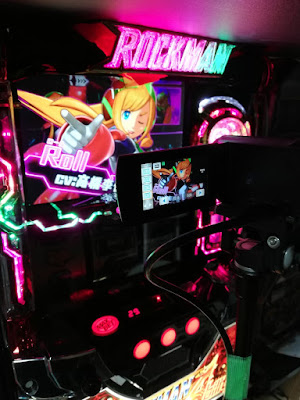 And that's that! When Pachislot Rockman Ability launched the only way to obtain footage was to go down to a pachinko hall and record it using a phone. This, unfortunately, meant lots of background noise would be picked up, not to mention the poor picture quality and the matter of filming what is essentially a gambling machine. That's a real no-go.

Luckily for us, though, we were able to find someone who actually bought the machine, which means we got a ton of footage in high quality without background noise and the possibility of getting into trouble for doing so! So Major thanks to Genzi for spending a small fortune on the machine itself and playing essentially blind since the camera had to be placed up on the screen!
Posted by Vhyper1985 at 9:28 PM