Mega Man Megamix author Hitoshi Ariga stopped by FanExpo this past weekend, and while I wasn't there to indulge in the festivities, readers Saber Chan and Joshua were, scoring some nifty sketches from the man himself. The illustrations consist of characters from Mega Man himself to a helmetless Bass! Scope them out below. 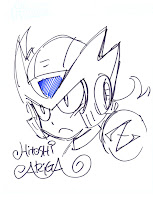 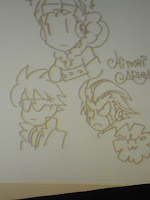 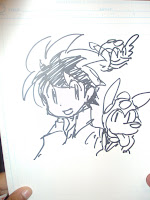 helmetless Bass, center image, bottom right
Additionally, here's a few photos of the event itself which played host to a Q&A panel between Ariga and fans and a launch party for Megamix vol. 2 (due out September 8th):

Finally, some interesting tidbits about Ariga that came out of the Q&A panel, provided by Joshua:

Seems like a pretty cool guy, Ariga. Did you attend the event? Let us know how it went in the comments! Once more, thanks for the pics and info, Saber Chan and Joshua.
Posted by Protodude at 7:21 PM