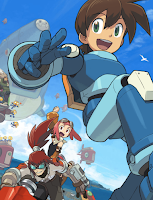 Capcom's lips are sealed tight for the time being in terms of what they'll show off at E3 next week, but when it comes to the Blue Bomber, it isn't too hard to figure out. To help you keep your expectations in check, I've laid out the probable titles we might hear from next week, June 6-9. Fair word of warning: this year's looking a bit bare.


Mega Man Legends 3 Prototype Version: This one's a no brainer. With Prototype Version delayed past the eShop's June 6 launch, there's very little doubt the title won't show up at E3 in some shape or form. The chances of a showroom floor demo hinge on whether or not Capcom managed to up the game's quality since word of the delay hit the web. If it isn't playable, however, the least we can expect is a couple new trailers and satisfying amount of new screenshots. Ideally, E3 presents a grand opportunity to announce Prototype Version's new release date. The probability of that announcement, too, hinges on how far along the game has progressed since the delay.


Mega Man 2 3D: Nintendo are planning a hefty amount of content to entice 3DS owners into accessing the eShop, with one the major players being the advent of 3D Classics. As the name implies, the is a lineup of classic games enhanced in 3D (e.g Excitebike 3D) featuring layered stereoscopic visuals.  Mega Man 2 3D is supposedly in the works, according to a statement made by Nintendo of America president Reggie Fils-Aime at last year's E3. We've yet to hear from the title since then, but considering the eShop is launching on the same day as Nintendo's press conference, there's a chance future 3D Classic titles will be discussed during the meeting in some capacity.


Rumored 25th Anniversary Project: Rumor has it Capcom will unveil a brand new Mega Man game at the show to commemorate the franchise's upcoming 25th anniversary. Although specifics were not divulged behind the nature of the project, the general consensus among fans indicates it could be anything from Mega Man 11 to a new Mega Man X. Unfortunately, we've very little factual evidence to support this rumor, nor have I heard even a whisper from my big source. I advise you to not get your hopes set too high on this one -- there just isn't enough credence.


"Super" Marvel Vs. Capcom 3:  Capcom's eerie silence towards MvC3 downloadable content has spawned countless rumors of a forthcoming Super Marvel Vs. Capcom 3. Similar to Super Street Fighter IV, "Super" MvC3 will boast an updated roaster, chock full of characters not included in the original game. An incarnation of Mega Man will supposedly be fully playable this time, amidst a batch of other Mega Man series characters. The prospect of an updated MvC3 seems plausible, although like our 25th ann. project, there isn't much to go by.


E3 coverage begins as early as Monday, June 6. I will not be in attendance this year, though I intend to closely watch many blogs and sources for news. Should you need to get in contact with me, shoot me a line: rockman20xx AT yahooDOTcom.

UPDATE: E3 has come and gone, and we've no Mega Man news to report from the show. Oh well. There's always next year!
Posted by Protodude at 12:37 PM