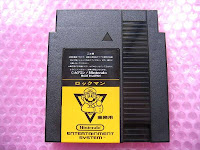 Yahoo Japan has a Famicom Box version of the original Rockman up on the auction block, an item that collector's will surely want to get their hands on.

The Famicom Box variant of the game was manufactured specifically for use on the Nintendo Famicom Box, a module found mainly in Japanese hotels that's capable of holding up to 15 built-in Famicom games (click the link to read more about the system). Never sold publicly, this version of Rockman 1 is very hard to come by, let alone individual Famicom Box games in general.

The game is currently going for a whopping 9,800 Yen (roughly $109 USD). If you're located outside of Japan, you'll have to bid through a proxy service such as Rinkya or Japan Auction Center.
Posted by Protodude at 12:00 AM